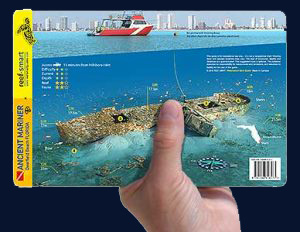 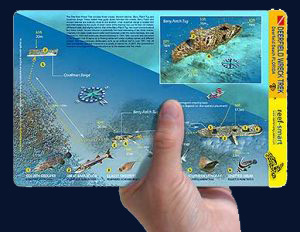 The "Wreck Trek Ft. Deerfield" is a 3 wreck drift dive that includes The Ancient Mariner is decommissioned Coast Guard cutter approximately 165 feet long sitting upright in the sand with a slight list to port. The bow is pointing straight towards the 62 foot Berry patch tug approximately 200 feet away.

The tug is also sitting upright in the sand, the bow pointing to the east. In order to make it to the final wreck the Quallman Barge located about 500 feet to the south. You will have to be good on air, navigation and should only be attempted by experience divers.

We start off the day with our first dive on the Wreck Trek Deerfield site. Then it's off to our second dive which is typically a drift dive somewhere on the third reef system. The drift dive location is selected based on conditions and visibility.

Divers will have one hour at each location, air and bottom time permitting.

The Wreck Trek Deerfield consists of three shipwrecks. The Berry Patch Tug, the Ancient Mariner and the Quallman Barge

The first wreck to be placed in the area was the AL Spencer currently known as the Berry Patch Tug. The Berry Patch Tug was built in 1940 she is 62 feet long and 16 feet wide. Originally she was used to tow barges loaded with sand from the Bahamas to Florida. She was scuttled on August 15, 1987, as an artificial reef.

The Ancient Mariner a former Coast Guard cutter and sub chaser that was eventually turned into a floating restaurant and was responsible for one of the largest outbreaks of hepatitis recorded at the time. She was scuttled on June 9, 1991

The Quallman Barge there is not a lot of information on this barge however we do know it was 100 feet long and 32 feet wide. It is currently sitting upright in the sand with lots of holes in it great place for Marine life in large schools of fish. The barge was scuttled on July 1, 2000

This is a well-established wreck site and there is an abundance of marine life that resides in the area. It is common to see large schools of small and medium tropical fish, stingray’s large and small, eels, lobsters and the occasional Turtle or Eagle Ray. Also due to its location it is a good place to look out for whale sharks.