The SS Copenhagen is a 19 century cargo ship that ran aground May 27, 1900. This steel hull single screw Schooner rigged steamship, measured 325 feet long with a beam of 47 feet long and 25.6 feet deep. The SS Copenhagen had a maximum speed of 8 kn and a complement of 26 crew.

The Copenhagen was declared a State Underwater Archaeological Preserve in 1994. 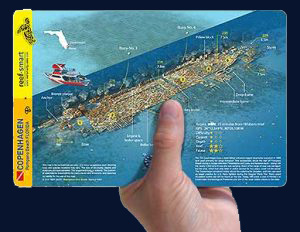 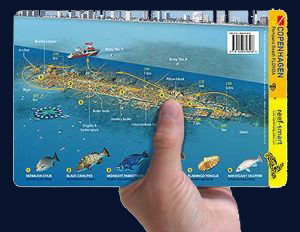 The SS Copenhagen is laying up right where it originally ran aground at the Pompano drop off. The wreckage of the Copenhagen is pretty broken up however you can still identify some of the features relatively easily.

The ship is facing North and South and on the southern end of the wreck there is a plaque commemorating the site as a Florida underwater archaeological preserve. In the same area there is also the anchor.

If you continue to the southeast you will find what is left of the bow surrounded by a sand desert. From the plaque if you wander to the east and follow the wreckage around to the north you will find the mast as well as some pieces of the side of the ship.

We start off the day with our first dive on the shallow wreck site of the SS Copenhagen. Then it's off to our second shallow dive site named The Nursery. We have 1 hour to explore each dive site. Air and bottom time permitting.

The SS Copenhagen was constructed in the late 1800s in Sunderland, England. The SS Copenhagen was registered in Glasgow, Scotland, to the Glasgow Ship owners Company, Ltd., which used the vessel to transport cargo across the Atlantic. Launched in 1898, the SS Copenhagen met a watery grave only two years later during a voyage between Philadelphia, Pennsylvania, and Havana, Cuba.

The SS Copenhagen was transporting some 4,940 tons of coal when, without warning, it ran aground and became stranded on a reef. The crew began to unload cargo and efforts were made to free the ship from the reef but, ultimately, the vessel was abandoned.

An investigation into the sinking of the SS Copenhagen reported that the official cause of the accident was "improper navigation" by the ship's captain, William S. Jones. The wreck remained visible above the water for a prolonged period of a time, and the Navy used it for target practice during World War II before it sunk under the water.

While the 325-foot by 47-foot ship has been stripped of its engine, boilers, propeller and other machinery, it is well preserved, and many of its features are still recognizable. However, the bow section was removed during an excavation attempt and presently lies 200 yards southeast of the wreck. Today, the SS Copenhagen has become an artificial reef, and has stabilized, reaching a state of equilibrium with its environment.

This is a well-established wreck site and there is an abundance of marine life that resides in the area. It is common to see large schools of small and medium tropical fish, stingrays large and small, eels, lobsters and the occasional Turtle or Eagle Ray..