The depth is around 65 feet to the top of the shipwreck superstructure. The main deck sits at about 100. With a max depth 125 to the sand

The rodeo 25 is a Dutch freighter at 115 feet long and 33 feet wide. The ship is currently sitting in the sand listing to the starboard side still in pretty good condition. The ship has been down for quite a while so there is a lot of growth. 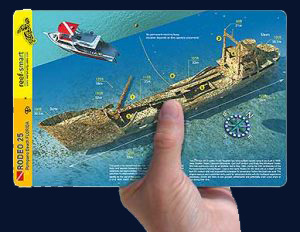 The Rodeo 25 is considered an advance dive. She is located on the east side of the main reef straight off Pompano Beach. The ship is upright with the bow facing to the south. She is located approximately 550 yards south of the Mariner II barge. There is typically a light to moderate current on this wreck however the current can become very strong during strong Tidal movements. The Rodeo 25 is an excellent wreck for penetration however you must have the proper training and proper equipment.

We will start out our day with our first I’ve been on the Rodeo 25. Our second dive is typically a drift dive somewhere along the third reef line. The captain will pick the second dive location based on conditions and visibility. We have 45 minutes to 1 hour at each dive site air and bottom time permitting. The departure dock location for this dive trip is located in Pompano Beach.

Wreck history The Rodeo 25 is a Dutch freighter built in 1956 and went under a bunch of different names. Originally named the Nore however in 1969 she was sold and renamed the Booker Trojan until 1976. She was then purchased again and renamed the Caricom Adventure and then named again the Cari Gulf Venture.

Then again in 1986 she was renamed the Windward Trader. The Windward trader sat in the Miami River for the next four years and was considered a derelict abandon ship since the owners did not pay their dockage fees. Eventually the vessel was purchased and retrofitted to be turned into an artificial reef.

May 12, 1990 with almost 100,000 people watching the Pompano Rodeo Reef Committee scuttled the ship and renamed the area rodeo 25 reef. Thousands of divers have visited the area and it is definitely one of our most popular deeper wreck sites.

The Rodeo 25 is now an established shipwreck due to its size is an excellent place to view large animals such as Goliath groupers, large barracuda and big schools of fish. We have also seen sharks and well sharks on this wreck along with turtles and dolphins on occasions.