The depth is around 85 feet to the top of the shipwreck superstructure. The main deck sits at about 100 to 110 feet. With a max depth 135 to the sand

The Lady Luck formally known as the Newtown Creek is a 324 foot tanker ship. The ship is approximately 75 feet tall and 45 foot wide with three open compartments and access to the wheelhouse engine room and superstructure decks. The superstructure on the ship sets to the aft with a big open deck forward which includes, a stationary crane piping running up and down the deck. The ship was converted to a casino theme by the Isle Casino which includes a poker table with card sharks, a craps table with an octopus dealer, giant dice, slot machines and more. 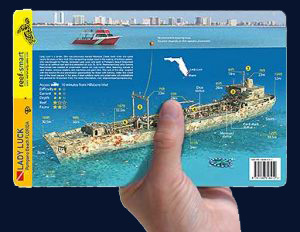 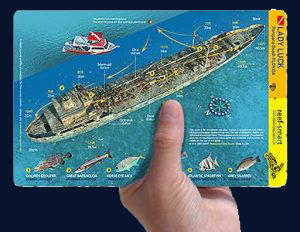 The Lady Luck is considered an advance dive. She is located on the east side of the main reef straight off Pompano Beach. The ship is upright with the bow facing to the south she is located approximately 150 yards east southeast of the Rodeo 25. There is typically a light to moderate current on this wreck however the current can become very strong during strong Tidal movements. The Lady Luck is an excellent wreck for penetration however you must have the proper training and proper equipment.

We start off the day with a wreck dive on the Lady Luck, the world’s first underwater casino theme shipwreck. Then it's off to our second dive which is typically a drift dive somewhere on the third reef system. The drift dive location is selected based on conditions and visibility.

Wreck history The Lady Luck originally named the Newton Creek was built in 1967 by Wiley manufacturing company in Philadelphia. The ship was built as a sewage tanker (Honey Tanker) and operated in New York Harbor for nearly 50 years. The Newtown Creek was decommissioned in the summer of 2014 and put up for auction by the City of New York. On March 1, 2016 Ship Wreck Park Foundation of Pompano Beach purchased the New Town Creek from NYC, thanks to generous donations from the Isle Casino Racing and the City of Pompano Beach. After several delays, on April 18, 2016, the ship was towed from NY arriving in Miami on April 24, 2016.

The ship was sponsored by the Isle Casino and as soon as it arrived, crews began preparing the ship for its final resting place in shipwreck Park Pompano Beach. I’ll casino hired artist Dennis McDonald to create a casino theme on board the ship. With all of the things that you may find in a casino such as slot machines, card tables with card sharks, craps tables with octopuses and giant dice and chips spread around the ship. After completion of all the alterations and final inspections of the Lady Luck she was towed out to her final resting spot on July 23, 2016. The scheduled scuttling of the ship was supposed to happen around 2 PM however due to the large crowd that gathered around to watch the sinking the operation was delayed until around 5 PM that day.

The Lady Luck has made an excellent addition to Shipwreck Park and is one of the most popular wrecks in the area due to the casino theme and the abundance of marine life that is established itself around the wreck. It is not uncommon to see Goliath groupers large schools of barracuda and an abundance of schooling fish on the wreck.

The Lady Luck is now an established shipwreck due to its size is an excellent place to view large animals such as Goliath groupers, large barracuda and big schools of fish. We have also seen sharks and whale sharks on this wreck along with turtles and dolphins on occasions.